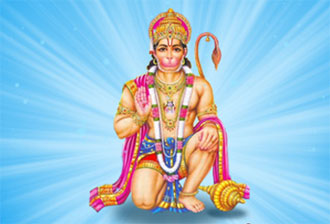 Birth Of Anjaneya : Anjana was a lovely young Vaanara* maiden. One day as she was strolling in the sylvan gardens of Kishkindha, the wind god Vayu came by hurriedly and swept her garland away. Anjana was startled and about to get angry with the god, but by then the strong and energetic wind god had realized his folly and returned to apologise. As he cast his eyes on her, he was struck by Manmatha, the god of love. He apologized to her delicately and Anjana was taken in very much by this handsome young man. They married.

In time, they had a lovely baby boy. He was called Anjaneya or Anjana's son. He was as intelligent as he was mischievous. Vayu had immense responsibilities and he could not keep them waiting any longer. Having bestowed upon his son his own powers, Vayu bid farewell to a tear-filled Anjana and his lovely young son.

Anjaneya was growing to be an unmanageable child. One day, he saw the sun at the break of dawn. He was tempted by what he thought was a luminous orange fruit and leapt skyward to catch it. Surya, the Sun laughed thinking that the little monkey was going to fall down to the earth and hurt himself, but nothing of that sort happened. Instead, the monkey came closer and closer to the sun and he was not even getting scorched!

Comprehending the situation it a little too late, Surya ran to Indra, the king of gods, for help. Indra mounted Airavata, his elephant, and rushed towards Anjaneya. The little monkey now excitedly turned his attention to this elephant. But sadly, just then, Indra's thunderbolt struck him and he fell down!

Vayu sensed that something was wrong and rushed just in time to hold his son in his arms. He learnt what had happened and was outraged. He broodingly retired into a cave deep in to the earth.

The three worlds began to choke and struggle for want of air. The gods panicked and rushed to the creator Brahma for help. Brahma went to Indra and asked him to apologise to Vayu, for he had struck a mere little child with his tremendous thunderbolt. Indra, realizing his folly, did so. Vayu yielded to Indra's apology. Brahma revived Anjaneya. He was now called Hanuman, one whose chin is broken (by the thunderbolt).

Vayu asked the little monkey to pay his obeisance to Brahma. The mischievous one did so and when the pleased Brahma told him to ask for a boon, he cleverly asked, 'Give me all the wisdom you have!'

Brahma, understanding the magnitude of the little boon, smilingly granted him the boon. For giving away wisdom only multiplied it and did not make the giver any poorer for it! Further, Brahma granted that he would, because of his wisdom, be a Chiranjeevi or an eternal being.