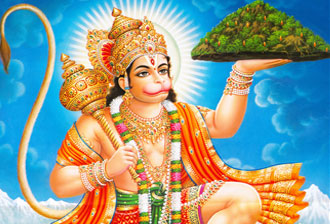 Despite many attempts by Sri Rama and his men to come to a peaceful settlement with Ravana, this did not materialize. Filled with egoistic pride and egged on by his un-wise ministers, he declared war. So war it was, quick-killing and enervating, sapping all energy - physical and mental.

Both armies suffered - Ravana's because its king wanted war and Rama's because its leader wanted peace. Stark distinction in intent apart, nothing was different in the fate with which they met. Barren land that was the meeting ground for the two armies was now drenched in blood; men lay everywhere broken, pierced and torn in every limb, every muscle, every bone, every nerve; they lay there alive, half-alive, barely-alive, nearly-dead and dead; writhing and twitching in pain until they could no more writhe and twitch.

With the coming of Indrajit, Ravana's son, who had the ability to make himself invisible and who wielded terrible weapons of boon from the gods, the scenario was turning bad in Rama's camp. Even Lakshmana lay in a swoon. There remained only Rama, Hanuman and Vibheeshana to lead and not many beyond finger-count among the soldiers.

When everything seemed apparently lost, Jambavan asked Hanuman to bring some herbs from the Sanjeevani Mountain. So, with an urgent mission on hand, Hanuman leapt skyward and flew north like lightning. Having spotted the Sanjeevani, he alighted upon it, only to see that it was densely forested, difficult to distinguish one herb from another. Instantly he decided that instead of trying to discover the herbs needed, he would carry the mountain itself back to Lanka!

Growing to an enormous size with his powers of Mahima, he dug his hand deep beneath the mountain and with a thunderous, "Jai Sri Rama," he uprooted it from its base, held it in his hand and flew south. It was spectacular to see a whole mountain descend upon Lanka's battle-field. Jambavan took the herbs and revived the dying men. Even men from Ravana's camp were treated. These grateful men, who would otherwise have died neglected and in anonymity, now insisted upon fighting for Rama.

With the herbs from Sanjeevani now available, Indrajit was killed by Lakshmana and Ravana by Rama. Lanka was liberated, Vibheeshana was crowned king and the land, now sanctified by Rama's advent and Vibheeshana's coronation, came to be called Sri Lanka. Seeta was reunited with her Lord and, the exile period now over, they returned to Ayodhya.