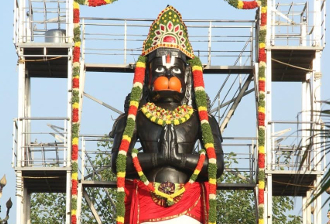 Suchindram Anjaneyar Temple : Suchindram Anjaneyar Temple is also called as Thanumalaya Perumal temple, Hanuman temple. It's a belief that Lord Shiva stayed at Suchindram Temple when Devi came for self-punishment at Kanyakumari. Suchindrum is located 6 km south-east to the district capital Nagercoil and 13 kms from Kanyakumari. Suchindram is lying between Nagercoil and Kanyakumari main road. This Hanuman Temple situated in a village of Suchindram and is famous for its sculptural richness and tall tower known as "gopuram". This gopuram is large, white colored, sculptural and 40 meters in hight.

There is a large Hanuman statue is the main attraction in the temple and "vada mala" pooja is special for this Hanuman. The statue is 18 feet high and depicts 'visuvaroopam'.