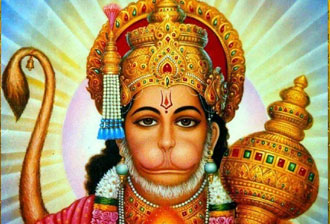 Sree Moola Anjaneya Swamy Temple : Under the noble guidance of his Guru Sri Sethu Bhawa Swami, Sri Pratapah Simha had built a temple exclusively for Lord Anjaneya in Thanjavur. Normally temple for Lord Anjaneya will be small in size and built-up area. There will be no exclusive Rajagopuram or dwaja sthambam, but this temple is an exception. This temple has a three tier rajagopuram and a dwaja sthambam. It has a eighteen pillered alankara mandapam. This is the second largest ancient temple built exclusively for the Lord with rajagopuram and dwaja sthambam, I had come across and the other being the temple in Iyenkulam near Kanchipuram. **** The Lord of this temple built by Sri Veera Pratapah Simha is known by the 'Sri Pratapah Veera Hanumar'. But this temple is known as 'Moolai Anjaneya' temple, moolai in Tamil means corner.

There is complete Rasi Mandalalm [the twelve houses of the various Grahas as generally represented in a birth chart] is depicted nicely on the inside of the roof and it is believed that the wishes of the devotees will be fulfilled if they stand on the floor corresponding to their Rasi while praying to Sri Anjaneya Murthy.

There are two sculptures in the Northern wall of the sanctorum depicting Lord Anjaneya in Yoga posture sitting on the top of the mountain. There are animals and trees shown in the mountain. Yoga Anjaneya is seen with four arms, while top hands are seen holding sangu and chakram (couch and disk) while the other two are seen blessing with 'abhaya and varadha mudras'. While one depicts the Lord being worshiped by Veera Pratabah Simha and in the other it is his son Tulaja II. These Yoga Anjaneyas are seen facing north, hence it is said that praying Him will give Siddhi.

Sri Pratapah Veera Hanumar (Lord Anjaneya) is in ardhshila form is facing east and Lord Anjaneya is facing north. He is seen blessing devotees with his right hand which is in 'Abya mudra'. The upward looking golden eyes are blessing the devotees with lot of self confidence in their endeavor, which brings all prosperity in life.