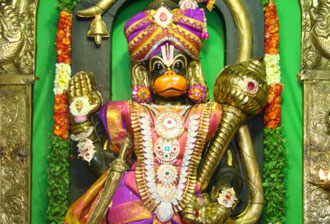 Sri Anuvavi Anjaneya Swamy Temple : It is said that there is match to the battle that was fought between Sri Rama and Ravana. The battle was furious, fraught with temper, the vigor of all those in the field was at the peak, a fierce battle it was. There were line up of the great warriors on either side, mere mention of the name itself will create fear on the other side. Such was the battle that took place in Lanka. In the battle field the magical weapon used by Inderjit the son of Ravana wounded Sri Lakshmana the younger brother of Sri Rama. Lakshmana was unconscious lying in the battleground. Vibishana was anxious. Vibishana and Anjaneya seek guidance from Sri Jambhavan.

Sri Anjaneya was flying towards Sri Lanka, carrying the mountain in his palm. While near mountain ranges called podhikai he felt thirsty but he continued his journey. Lord Karthikeya (son of Lord Siva and Parvati. Popularly known as Lord Murugan in Tamil Nadu) with his consort Sri Divayani happen to there in one of those mountains at that time. They saw Sri Anjaneya flying southwards and they realised that Anjaneya was thirsty, in a moments time Karthikeya pierced the mountain with the spear (the weapon associated with Lord Muruga known as 'Vel' in Tamil) held in his hand. Alas! fountain erupted out of the mountain. Sri Anjaneya flew down a little to capture the water coming out as fountain and quenched his thirst and continued his journey.

Set in a serine background the welcome arch stands near the main road welcoming you to the temple. The welcome arch is beautifully designed. On one side there is Lord Genasha and on the other side Lord Anjaneya.

There are nearly 550 steps to be claimed to reach the main temple. There is small temple for the Genasha on the way. Main deity here is Lord Subramaniya (Sri Karthikeya) with his consorts Sri Divayani and Sri Velli. Adjacent to sannathi of Lord Subramaniya is the sannathi of Lord Anjaneya Swami. There is a small 'rath' made of wood for taking the deity around the temple in 'parikrima'. If you climb the steps that are adjacent to the Anjaneya sannathi, you will see the place from where Lord Subramaniya had witnessed Lord Anjaneya quenching his thirst. Adjacent to that is the spring from where water is collected in the tank.