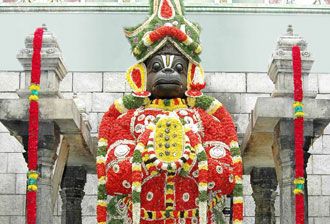 Sri Digambara Anjaneya Swamy Temple : In Threthayuga, during the Ramayana period, Sri Hanuman lifted the Sanjeevi Mountain from the Himalayas to get medical herbs. He then took the mountain back and replaced it in its original place. When he returned, he brought a salagramam. During his journey, as the sun rose, he went down to the earth and performed the ritual of santhaya vanthanam after placing the salagramam near Sri Mahalakshmi's tapavanam.

After performing the pooja, Hanuman tried to lift the salagramam, but was unable to move it as easily as before. Suddenly, the salagramam grew larger and Hanuman heard an oracle saying, "Lord Narasimha wishes to stay here and he wants Hanuman to save Sri Ramachandramurthy first of all." Thus, Sri Hanuman completed his task and came to Namakkal Sthalam on the western side of the rock, where he stands in open air and worships Lord Narasimha Swamy.